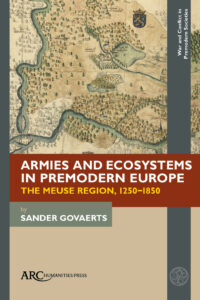 Armed forces protected and preserved nature for centuries before the rise of modern environmentalism. This is not a naive embrace of the military, but a critical approach to their rhetoric of being “environmentally conscious”. Armies and Ecosystems in Premodern Europe The Meuse Region 1250-1850 studies interactions between armed forces and their environment in their full complexity, including landscape modifications, animal agency and disease prevention. In this way it does not just denounce greenwashing by the military, but also provides a framework to study the “ecological footprint” of armed forces in a historical perspective.

During the last decades the military has come under increasing scrutiny for their role in environmental degradation, especially warfare destruction. The use of pesticides during the Vietnam War is a particular notorious example. Departments of Defense try to counter this criticism by promoting a different image to the general public. Since the 1990s military training areas in Europe and North America have received recognition for providing a valuable refuge for many kinds of endangered species (additional information here). The Indian army has Ecological Task Forces that actively contribute to land restoration, and many countries in Sub Saharan Africa, Latin America and South East Asia have militarized their anti-poaching and anti-logging efforts (additional article here).

The inspiration for writing this book actually comes from a visit in 2009 to a military base that also served as a nature reserve. Beverlo Camp in Belgium is part of Europe’s Natura 2000 network, which aims to protect habitats and species threatened with extinction. The very idea that the military preserved nature struck me at that time, for I was a member of an environmentalist youth movement, but also very interested in military history. When I got a chance to start a proper historical study on the subject, five years later, my initial surprise had worn off. I understood then that the military is intentionally promoting an image of being “environmentally friendly”, but also realized that our own distorted image of the historic past is part of the problem as well. Modern armed forces can claim to be environmentally conscious because we all assume that their historical predecessors only had a negative impact on the environment.

This is why my book argues that the abovementioned examples of protective behavior are not modern at all, but can be traced back to a much more distant past. Furthermore, in order to properly examine their ecological importance, they have to be seen as part of a wider range of interactions. Armies and Ecosystems in Premodern Europe devotes attention to both positive and negative ecological impacts of historical armed forces. The first two chapters, frontiers and fortifications, are concerned with landscapes or the non-living environment. The third and four chapters, disturbances and policing, study living beings (biotic communities), and the final chapter, army health, focuses on diseases (pathogens).

Because I wanted to study the relationship between armed forces and nature in a different way, simply choosing a political entity as a geographical context would not do. It had to be equally relevant for both military and environmental history. Once I established this, I quickly choose the basin of the Meuse River, which ranges from Lorraine in northeastern France to Rotterdam in the Netherlands. The Meuse Region was of major strategic importance in a European context because the river was valuable as a defensive line and as an invasion route between France and the Holy Roman Empire (Germany). Today it is often associated with the Battle of the Bulge (1944) and Verdun (1916). These are only two very recent additions to a very long list, which includes the battles of Othée (1408), Rocroi (1643), Lauffeld (1747), and Ligny (1815). The Meuse region also provided a home or early grave for legendary warriors such as Jeanne d’Arc and the Count d’Artagnan.

The chronological limits, 1250-1850, might seem to be exceptionally long, but they are necessary if we are to gain a deeper understanding of the ways armed forces interacted with their environment. If we go beyond the framework provided by particular wars, even a particularly long one such as the Eighty Years War, it becomes apparent that their impact should not be overestimated. Battles or sieges are very spectacular events and therefore very visible in our sources. Yet they were ultimately far less important than simple but continuous interventions such as military training exercises, planting trees in fortifications, and maintaining gardens. The preparation and aftermath of armed conflicts, which includes arms production and the impoverishment of the general population, are much more ecologically destructive in the long run than fighting.

Emphasizing distinctions between short- and long-term influences also draws attention to continuity between the Middle Ages and the nineteenth century. Concepts and practices of engaging with nature developed during the Central or High Middle Ages remained relevant during subsequent centuries. The garden-wilderness dichotomy for instance, which differentiates between “tamed” and “uncontrolled” nature, still informs the approach of many environmentalists to ecological conservation. “Wilderness” and “rewilding” are unfortunately not magic words that will resolve all our problems. What we really need is to change the way we interact with our environment on a daily basis. Armies and Ecosystems in Premodern Europe demonstrates that historically armed forces were well integrated into ecological systems and made sustained efforts to preserve them. Hopefully it will serve as an encouragement for their modern descendants to put far more effort into preserving the environment and prevent them from hiding behind a simplistic image of the past.

By Sander Govaerts, who is a postdoctoral researcher at Utrecht University. Since November 2021 he has been working at Ghent University on the FWO-funded project “Unwanted Nature. The Persecution of Nuisance Animals in Flanders and Brabant, 1400-1600”.