This post is intended to give some intellectual and experiential background to this book, Animism, Materiality, and Museums: How Do Byzantine Things Feel?, which was published earlier this month (it is available in open access). It represents a still provisional statement of my own thinking about the vitality of matter in the Byzantine world, how we might understand historical objects outside Cartesian categories, and how we might allow such historical objects to speak, if not with their natural voices, then in voices that are true and authentic to some of their meanings and work.

My own experience of taking, or accepting, things ‘on their own terms’ came to me in direct proportion to the number of times I was able to visit the Menil Collection in Houston, TX. At the Menil, the art can very often speak for itself, without the interference of signage and labels, and where objects and humans are encouraged in every possible way to engage in a mutual interrogation. 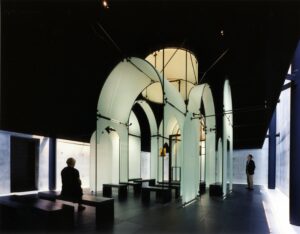 The former Byzantine Chapel Fresco Museum at the Menil was fundamentally formative to my thinking and feeling. For my work on the materiality of Byzantine art, and indeed for the intuition on the vibrancy of that materiality that led to my work on animism, that space totally remade me. It began with teaching, since I would very often bring students from Austin, and the time in that space just got longer, deeper, more moving each time. Now, these reflections are also nostalgic, because the frescoed chapel is no longer. Rescued by the Menil, restored, installed in Houston with the permission of the church of Cyprus, the chapel was in place in Texas from 1997-2012, when it was returned not to its original site — it was looted on the Turkish side of the Green Line–but in a museum in Nicosia, the still-divided capital of the island. It was a space that showed something more distilled and expansive in its framing of that art.

The heart of the building was this darkened shell, called an Infinity Box by the architect, that was lit by natural light washing down the walls, and spots that focused attention on the outline of a chapel in the center of the space. The inner chapel is built to the same scale as the historical building in Cyprus, and it is both that solid entity and something phantomish for the housing of the looted frescoes.  It was only when you went from the rim of the infinity box to its center did infinity really open up to you. 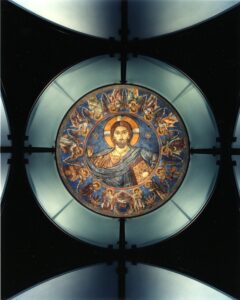 In the dome above, and only visible from that spot, in the very center of the chapel, Christ Pantocrator revealed themself at the almost end of time, while in the apse, an epiphany of Virgin and Child with archangels mediates that about-to-begin judgement initiated from above. The frescoes are the surviving portions of the original thirteenth-century program, but beyond these orphans, we know almost nothing about the program, patron, painter, or even the local saint to whom the chapel was dedicated. So, this place was the catalyst for my project of trying to understand and feel the particular, compelling agency of things, their special ways of acting on us and making us their own.

And it led to an ambition to make an argument for the life of objects, which I was able to realize with the exhibition Byzantine Things in the World in the summer of 2013. I wanted to try to argue for the animacy and autonomy of Byzantine objects by letting them enter into a conversation with art they would only encounter in the Menil Collection. So, the idea was to find a way to express, not to imitate, but to find a way to realize in a museum setting, the intensity of the aura around Byzantine in a ‘natural habitat’. I wasn’t aiming for piety, but for the power in these objects that gave them their subject-forming capacities.

I can say for certain now that my sense of control over the argument was overconfident. One thing I learned was how much more those objects had to show, to teach, to re-form me, than I had imagined possible. It was a great gift. 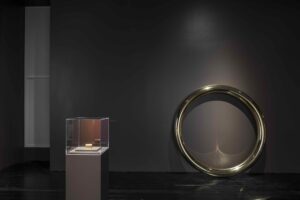 Let me try to express these ideas with part of one room only. And the exhibition book was only a provisional statement, as it turns out. And therein lies the reason for Animism, Materiality, and Museums, to try to catch up with and recognize those lessons the objects taught me, all the while recognizing the surplus they’ve kept to themselves. 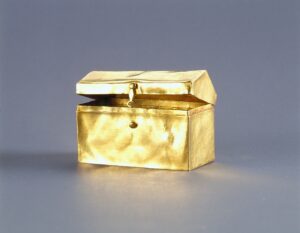 This room was midway through the exhibition, and it had a memorable intensity. The real star is the small gold box in the vitrine, dating perhaps to about 500 and probably originating in the Balkans. The idea was to demonstrate the mystery of vision in this room, how some materials destabilize themselves, come alive and extend their reach into all entities within their orbits. I use “things” purposefully as a way to indicate a horizontal world in which all are relational dividuals (not individuals, but divisible entities). The box merged, reflected, catalyzed their humans with their conversation. Viewers also consistently tried to touch the gold and brass. There’s something deeply charismatic about those objects. And in the end, I was won over to their reactive, quiet life that felt us back, in their ways that are so much slower and thoroughgoing.

So, this might be a way for me to think about taking objects on their own terms. I discovered it’s possible, when you are willing to give up some free will and assumption of human priority and discretion. It’s a good thought experiment, and it’s even better as an ethics experiment, I think. If we take all things on their own terms, which is really hard to do, then we might get closer to a democracy of dividuals. 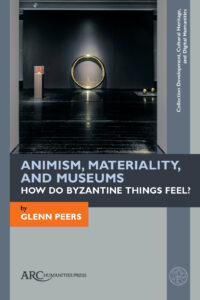 Buy the book now or read on Open Access