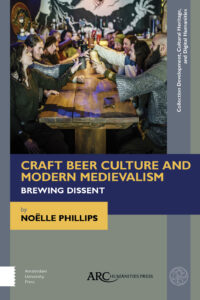 “You’re writing a book about beer? Ha! Can I help you with the research?”

This kind of response was a common one during my two years of researching, writing, and editing my book, Craft Beer Culture and Modern Medievalism: Brewing Dissent. I confess, the topic did make a good excuse for trying new beers and new breweries as I educated myself more comprehensively about the craft beer community, its values, and its pleasures. I’m not one to decline a good brew, and I enjoy making my own (in tiny one-gallon batches) on my stove. For some, however, the good-natured laughter at my book’s subject may indicate an understandable skepticism – unconscious or not – about the legitimacy of craft beer culture as an area of academic inquiry by an English professor. Because I am not writing about beer from the position of a cicerone (like a sommelier, but for beer), a brewmaster, or a business owner. Instead, I’m writing as an academic – as a medievalist, more specifically. So what am I doing writing about modern beer? Short answer: the cultural sway of medievalism. Long answer: let me tell you.

In my academic career thus far, I have published and presented on fourteenth- to sixteenth-century Middle English literature, book production, and paleography. These two hundred years of literary history were a time of rapid cultural change, at the end of which writers attempted to separate the “now” in which they lived from the “then” of the Middle Ages. It was common for early sixteenth-century editors and printers, for example, to describe the medieval texts they were publishing as “ancient”, even though they were written just a century or so before. “Ancient” precedence in these texts provided a rhetorical foundation that lent legitimacy to such movements as the Protestant reformation.

This resistance to separating one’s own time from the medieval period, while still appropriating the Middle Ages to one’s own ideological ends, never stopped. The adaptation, recreation, re-imagining, and appropriation of the concept of “the medieval” in post-medieval eras is called, in academic circles, medievalism. Medievalism surrounds us: we see it in films, architecture, comics, story tropes, clothing, clichés, and – yes – food and drink.

One’s choice of drink is a powerful marker of class and personal identity; consider the quick, unconscious (or not) judgments we might make of someone after hearing a drink order. Whiskey neat? A glass of milk? Coors Light? Decaf Earl Grey? Coffee with 5 tablespoons of sugar? An imperial stout produced by a local brewery? White wine with ice? Drinking, whether or not the beverage is alcoholic, is often a social activity and therefore entails a kind of social performance. It can be a defining feature of your public persona. Beer in particular embodies an unusually wide range of social and class identities. So when a significant subset of the beer industry uses medieval models to define or attribute value to its product, we can assume that the idea of the medieval carries cultural and economic power in this context.

Medievalism is a compelling marketing strategy in the craft beer industry, particularly in North America, whose culture of patriotism balances a nostalgia for a European past with a pride in its “New World” independence. The colonial tone here is not accidental; indeed, the colonial underpinnings of medievalism in general are inescapable, as one of my book’s chapters explores in more detail. Medievalism is multivalent in the craft beer industry, emerging in breweries and beers named after monks or other medieval figures, as well as in less obvious forms, such as the narratives spun about craft beer founders. The knight errant of medieval romance did not disappear with the last hand-copied parchment manuscript; he re-emerges in modern storytelling and in the valorization of entrepreneurship. The neolocalism of many craft breweries – their focus on local origins and attachment to place – becomes in “medievalized” breweries a sort of neotemporalism, in which European becomes local and medieval becomes origin (although brewing actually originated in North Africa and the Middle East). Medievalism in craft breweries says less about historical fact, and more about what we, as modern North American drinkers, value.

My book is therefore not a history of beer, nor is it an economic analysis of beer or a method for making it. It is, rather, an exploration of how beer is represented and talked about, both in the Middle Ages and in the post-1980 the craft brewing “revolution” in North America. In my profession, I analyze texts; in this case, beer culture is my text. Through evaluations of branding choices, comparisons with macro beer companies (such as Anheuser-Busch InBev SA/NV, producer of Budweiser, Miller, and hundreds of other brands), and interviews with craft brewers, I evaluate the cultural work that the craft beer industry does when it deploys medievalism. How is monkish branding different from Viking branding? How does the structure of tasting rooms reinforce historical reimaginings? Why are there so few women in medievalized beer branding?

These were all interesting inquiries, but that last question moved me into areas that were less comfortable and pleasant. The craft beer industry in North America, despite its welcoming nature, remains very white and very male. How does medievalism help to sustain this lack of diversity, and can we change this? My penultimate chapter attempts to tackle this challenging question by examining the alarming appropriation of medievalism by various white supremacy movements, and the implications that this has for a very white, masculine industry that often identifies the Middle Ages as its origin point. Indeed, anyone who adapts, uses or teaches the Middle Ages must acknowledge how this field has been weaponized and dehistoricized in order to exclude and harm marginalized people. We need to openly talk about this in order to resist it. This difficult chapter in my book is but one brief and inadequate intervention; I hope there will be many more.

After its analyses of monks, Vikings, nuns, alewives, and white supremacy, the book invites the reader to slow down in a final chapter about intoxication and why beer matters. I thought it worth considering why and how inebriating drinks have always, for millennia, been meaningful to us, both metaphorically and physiologically. The power of craft beer is not just in its unique taste and local attachments; it can loosen the tongue, expand the mind, and lower inhibitions. It can be revelatory. It can also, however, lead to wildness, stupidity, and violence. Medieval writers grappled with the contradictory effects of alcohol just as we do. But beer in its manifold forms can be a magical drink, one that electrifies the senses and solidifies bonds of friendship. In some ways, medievalism in the craft industry acknowledges beer’s longevity. Beer has more depth, taste, and spirit (pun intended) than we give it credit for, and it deserves serious attention.

Having said that – yes, I still enjoy doing the research.