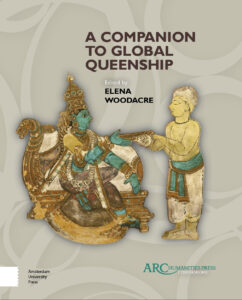 What is the main argument presented in your book?

This collection argues that we need to expand the focus of queenship studies to embrace ruling and royal women in a global context in order to truly understand the queen’s role. There has been an incredible amount of fantastic scholarship about queens and queenship in the medieval and early modern periods but much of this has been done in a purely European context, with a real emphasis on Western Europe. Our collection aims to push the boundaries of previous studies, bringing in examples of female rulers and royal women from Asia, Africa and Australasia as well as from the ‘fringes of Europe’ such as Kievan Rus’, Georgia and Islamic Iberia. Such a diverse group of case studies opens the door for fruitful comparisons of how queenship functioned in different places and in different periods. Indeed, many of the studies, such as the one by Tracy Adams and Ian Fooker on the courts of early modern France and the Ooku of Japan were deliberately comparative—juxtaposing the experience of royal women in very divergent settings to look for common threads.

Can you summarize what your book is about? What are its findings?

By bringing together such a wide range of studies, we hoped to show both ‘constants’ of queenship which can be seen across different time, places and cultures as well as the variety of experience that women had in these very different monarchical settings. For example, one area which was very different was the experience that royal women had in monogamous cultures—where there would be only one woman who could be the wife of the ruler at any given time, versus areas which practiced polygamy or allowed for concubines as well as wives for the monarch. Yet, while this did make a clear difference to the framework that royal women inhabited and to their official position, we still find queens operating in similar ways. For example, Renee Langlois’ chapter compares the regents of early modern France with those of the ‘Sultanate of Women’ period in the Ottoman Empire. She demonstrates the both the French and Ottoman regents used similar strategies to maintain and display their authority, in spite of very different practices within both monarchies and courts around the role of royal women and their theoretical visibility. The role of maternity which gave royal women a key role in terms of bearing, or selecting the heir can also be seen to be a vital element of the queens role in different geographical and cultural contexts as Diana Pelaz Flores’ comparison of queen mothers in Europe and Africa or Seokyung Han’s chapter on the role of dowager queens in Choson Korea both demonstrate.

What inspired you to write this book?

I was inspired by a keynote speech given by Merry Wiesner-Hanks at a conference a few years ago. She has long been a proponent of global studies and encouraged us all to think of our own disciplines in a global way. It made me think about both queenship and royal studies and how they have been perhaps too Eurocentric. Even since then, I have been striving to push the field in a global direction, to try to seek out those who are working on queenship and royal studies in extra-European contexts and bring them into discussion with other scholars so that we can gain a much deeper understanding of how queenship and monarchy work across all times, places and cultures.

What was the most surprising or exciting thing that you discovered during your research?

One of the things which really struck me when I was writing the introduction of the book is the difficulty of nomenclature-even the word ‘queen’ is linked to a very Eurocentric notion of monarchy. The word doesn’t translate easily into other languages and cultures-Fatima Mernissi talks about this in her fantastic book The Forgotten Queens of Islam in terms of how difficult it is to find an equivalent word in Arabic for example. Some of the chapters in our collection, like Jane Hooper’s, Lennart Bes’ and Aidan Norrie’s discuss how Western visitors to Africa, India and New Zealand tried to apply the term ‘queen’ and the European meaning that they were familiar with to the situation of royal women abroad, but it was an awkward fit which demonstrated that these visitors didn’t fully understand how power and authority were exercised by these women. In the end, even though it isn’t a perfect solution, I decided that it made sense to use the word ‘queen’ for the women in this collection, even though it is both loaded and limited by its own etymology and cultural context, to denote the position of the highest woman in the land and/or the consort of the ruler so that we could have a foundational term to build on.

What impact do you hope that this book will have?

I really hope that this book will kickstart a conversation about global queenship and inspire more scholars who currently work in a European context to look at royal women in other periods and places. I also hope that it will encourage scholars who are already working on royal women in an extra-European context to collaborate with others working in the field of queenship so that we can continue to produce more comparative studies like this one. Hopefully, this collection is only the beginning of a new direction and approach to queenship studies.