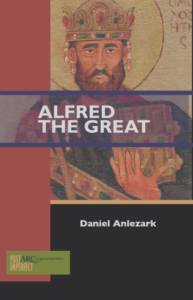 Alfred the Great is not one of the neglected figures of history. Interest in him as the founder of a dynasty, a nation builder, a university founder, a scholar, a poet, a warrior, and, in latter days, even a lover, has, over the past millennium made him an all-round wonderful guy. For one Victorian writer, he was the “most perfect character in history.” When I was approaching the job of writing a new book about Alfred, it became clear that Alfred might, however, have benefited from a higher degree of neglect from some of his biggest fans.

Many historians, beginning with the Welsh bishop Asser, have invested a lot in Alfred’s reputation. Alfred died in 899, leaving behind him an unsteady peace with his Viking neighbours and a national defence system still under construction. The flattering biography written by Asser, one of Alfred’s favourites, was also incomplete at the time. Asser stopped writing in 893, when it seems new Viking wars and his own responsibilities as a bishop disrupted court life. Until the nineteenth century, historians took Asser at his word in all he said about Alfred. Then, however, new textual criticism revealed that Asser’s biography had picked up a few extra stories along the way, including the story about how Alfred had burnt some cakes at a moment when he was living as a refugee—the moment was real, the cakes not. Asser’s work varies in its reliability as history by modern standards, but scepticism about his authorship altogether, which found some followers in the 1960s, goes too far.

But what is the right degree of scepticism to employ when writing in a biographical tradition which came to life in the 890s? The ealdorman (or duke) Æthelweard (a distant cousin) boosted Alfred’s reputation as an author in a Latin Chronicle written in the 970s, and from there Alfred never looked back. William of Malmesbury, one of the most important of early medieval historians, made Alfred the pre-conquest hero of his History of the English Kings—written for one Alfred’s descendants. By the eighteenth century, Alfred’s biographers were crediting him with founding of the English constitution and creating most aspects of its legal system, which they believed to be the best in the world, ever. American revolutionaries and their English Tory enemies fought over Alfred’s story, so that by the time of the French Revolution he was both an Enlightened democrat and model monarch. His radical credentials were reiterated by biographers in the nineteenth century, until by the beginning of the twentieth century he found himself keeping company with proto-Nazis and White Supremacists. That this lumped the first “king of the Anglo-Saxons” together with the über-Aryan Vikings in the context of whacky racial theories is ironic, to say the least, and has unsurprisingly damaged his standing. More recent popular portrayals of Alfred have treated him as a bit “wet” beside the cooler Nordic invaders who terrorized England in his day, perhaps indicating a cultural divorce which will do him no harm in the long run.

My role in writing a new book about Alfred the Great in the Past Imperfect series has not been to rehabilitate or defend Alfred. What I have tried to do is not only place him in his historical context (though there is a fair bit of that), but also within his shifting contexts across history. I have drawn on recent scholarship that has begun to make Alfred look a bit more like a real person—with undoubted and important achievements, no doubt, but also with faults and limitations. Alfred himself muddied the waters from the beginning by establishing his own PR machine, which has been mis-represented as “propaganda”, a loaded word that in itself suggests a sinister characterization of Alfred in twentieth-century context. In his own time Alfred used all means available to defend what he believed in—including his own family’s power, but also the rule of law, as well as literature and art. He welcomed people from various nations across Europe, and their contributions to his kingdom. In the Anglo-Saxon Chronicle he used the latest IT to tell his subjects of his ongoing achievements—its archive of the past, and year by year updates on current events, make it an extremely low band-width hybrid of blogging and tweeting, but serving similar purposes.

I hope I am forgiven for quoting the last sentence of my own contribution to the Alfredian avalanche: “Recovering from a Victorian reputation as the ‘most perfect’ person ever would certainly be difficult, especially for a man adopted by white supremacists, but a disabled youngest son, who lived homeless as a refugee, before re-founding and reforming his kingdom in the face of unrelenting violence, and a long-term hero of radicals and revolutionaries, might have a chance.”